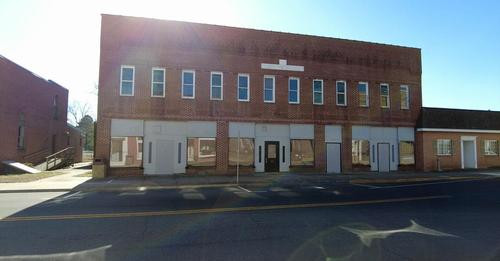 Onancock, VA, received a $1 million grant to rehabilitate the Lilliston building, the largest, most centrally located and visibly blighted structure in the town's downtown.

The grant also creates a pool of funds for low-interest loans to future developers of other vacant, blighted commercial properties in downtown Onancock. Renovations will be a catalyst for economic resurgence in the immediate area.

VA Governor Glenn Youngkin this week announced the funding award, which is part of more than $24.7 million invested in 22 Industrial Revitalization Fund (IRF) grants. The program targets vacant non-residential, commercially zoned structures whose poor condition creates physical and economic blight to the surrounding area in which the structure is located.

The funds were obtained through a partnership between the Town of Onancock and Onancock Main Street (OMS).

OMS identified the IRF grant as the best source of funds to rehabilitate the property, based on the financial feasibility study of the Lilliston Building commissioned by OMS.

OMS also coordinated the application process with the developer, Town, and Department of Housing and Community Development (DHCD). The Town will administer the funds in perpetuity.

"This grant is a major advancement to incentivize investment in our downtown while improving the vibrancy and attractiveness of Onancock to residents and tourists," said Matt Spuck, Onancock town manager. "It also demonstrates the power of a shared commitment between the Town and OMS to achieve these goals."

The Lilliston building, which has been vacant for nearly two decades, will be renovated into a mixed-use structure with first-floor commercial space and six residential units on the second. This project is viewed as a catalytic project for the downtown district of Onancock, creating at least 20 new jobs.

"The central location of this valuable and historic building in our downtown makes its restoration and return to use the lynchpin in any campaign for revitalization of our town," said Janet Fosque, president of OMS.

The $1 million grant was made to the Town, which will provide a low-interest loan to the building's developer. The developer repays the loan with 2.5% interest to the Onancock to create a revolving loan fund available to future developers of projects that fit DHCD parameters, including properties that are vacant or blighted.

Nestled between the Chesapeake Bay and Atlantic Ocean, historic, waterfront Onancock was chartered in 1680. The town, which has fewer than 1500 residents, offers charming houses and walkable streets with lodging, shopping, dining, and art.

OMS, part of the Virginia Main Street Program, is a volunteer-driven, nonprofit organization that works to develop and sustain Onancock's historic downtown as a vital economic, cultural, recreational, and residential center for the community. You can learn more about Onancock and OMS at https://www.experienceonancock.com/

Facebook
Twitter
Pinterest
WhatsApp
Previous article
Cyber Security Services Announces Plan to Be the First U.S. Cybersecurity Company to Provide Exclusive Services for Technology Distributors and Their Partners
Next article
Hello Dubai, new episode of The Most Expensive for Christmas

Just turning on our TV and seeing how the other half lives!

Just turning on our TV and seeing how the other half lives!

Just turning on our TV and seeing how the other half lives 😍 Watch the new episode of...
Celebrity News

Does the world know everything about the notorious Jennifer Lopez? It turns out there are still a few stories left to tell! The beloved entertainer recently gave an exclusive interview to Ari Global, which is now available on Gossip Stone TV. This celebrity reality channel broadcasts on Amazon Fire TV, Roku TV, and Apple TV—and […]
Celebrity News

Learn with Love is Part of the LGBTQ Youth Suicide Prevention Organization's Initiative to Protect Transgender and Nonbinary...

Copyright © 2022 EnRose Magazine. All Rights Reserved | Part of VUGA Media Group |  Fair Use  |  Terms of Use  |  Get Published